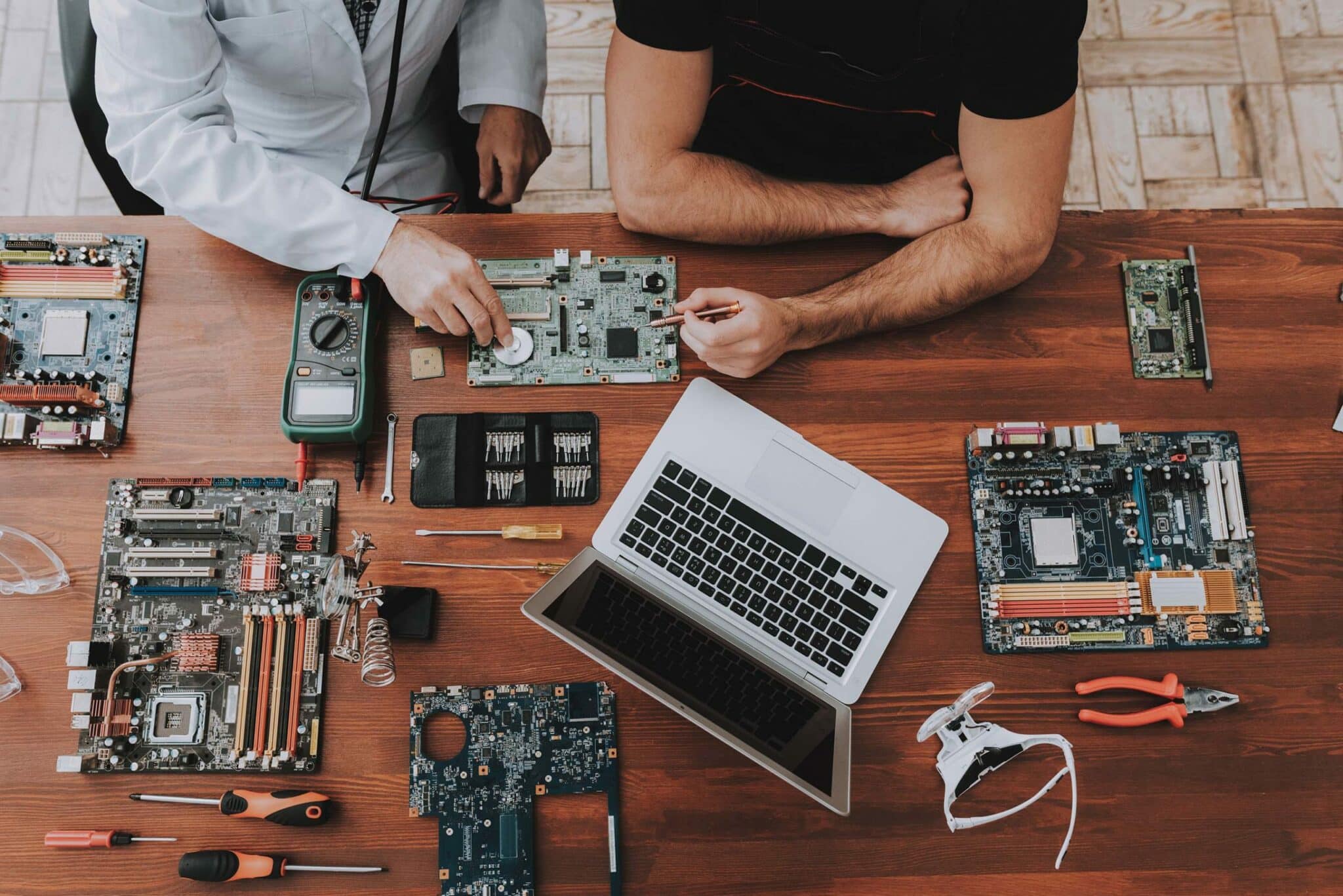 2012 was amazing because of YOU. That’s right! You, your company, and your computers. I can just hear you say, “Really? Tell me more.”

This past year, many businesses, schools and churches in St Louis and Denver connected with Forerunner Recycling. Why? For one purpose: To responsibly dispose their end of life cycle and surplus computer equipment AND to give back to their community through a computer dismantling program.

FIRST, A LITTLE BACKGROUND: Forerunner Recycling has partnered with numerous local non-profit agencies in the mid-west, that provides jobs and training for adults with disabilities.
These non-profit agencies used to be called ‘sheltered workshops’. They were created as a safe and caring environment for people with disabilities to join the workforce. These workshops started as grassroots efforts by parents who had children with disabilities and wanted them to have a chance to be productive members of society.
Now in the 21st Century, these caring environments have grown into more than a traditional sheltered workshop.

As a result, CONNECTING HEARTS WORKSHOP PROGRAM was created. Forerunner Recycling developed the program to connect the heart of business and their end of life cycle computer equipment, to the heart of these workshops. Forerunner started this initiative to teach and train adults with disabilities on computer disassembling.

DENVER, COLORADO: North Metro Community Services, located just outside of Denver employs nearly 300 people with developmental disabilities and has a 48 year history. The “Connecting Hearts Workshop Program” for North Metro started in March 2012. Nate LePage and his beautiful family of four with one on the way, moved from Kansas City to Denver specifically to open Forerunner Recycling and partner with North Metro.
Nate says, “My favorite part is hearing that the employees like doing the computers so much… it’s ALL they want to do. The managers have to force them to work the ‘other’ jobs.”

NEWS FLASH from DENVER: Ok, for all you business clients who received our August Newsletter, this is a repeat… but totally worth repeating!
An Annual review meeting takes place for each employee at North Metro. One of the goals for some, is to ‘just speak’. They have been asking “to do” the computers. “Wayne (one of our workshop employees) was hesitant about this job at first, but he’s grown to really enjoy taking apart computers. He takes more initiative in this job than past jobs. He takes more pride in his work and is making strides in areas such as communication with his supervisors and timeliness.”

A HUGE PILE OF AWESOMENESS! That’s what CHAD from Sharp Shooter Imaging in Wheat Ridge, Colorado just called and said. That “awesomeness” refers to all their computer equipment needing to be recycled. (Chad wins the “Amazing Quote” of the year for “Connecting Hearts”.)

AMAZING DENVER FACTS: North Metro recycled 30 tons of equipment. They received their first check for e-scrap of $1800, and their highest e-scrap check received was $6100. Amazing! And they are just getting started. Thanks to each and every one of you in the Denver area! You are a major part of this wonderful story unfolding.

ST LOUIS, MISSOURI: The beginning of The Connecting Hearts Workshop Program started in St Louis and quickly became our pilot program in June 2011 with J.S.I. J.S.I, (Jefferson County Subcontractors Inc), A Workshop for Special People, located in Arnold, Missouri, a suburb of St Louis, employs nearly 120 people with developmental disabilities and has a 32 year history.

IT'S AN EASY DECISION, stated Christine, Sr. Mgr, Personal Technology & Communication at Panera Bread. When Christine heard about the Connecting Hearts Workshop Program, she commented, “This program sets you apart from other recyclers.”

THERE IS NO COMPARISON, says Thys Lourens, CIO for a St Louis business.

They have had numerous computer companies offer them profitable financial incentives if their company would release their computer equipment to them. Thys noted there is no comparison when it comes to two companies in the community coming together (St Louis business and Forerunner Recycling/JSI), where his company can make an impact. He also stated, "The difference our program makes, we cannot compare it with the impact it makes in the community. We need to look at doing business differently. It takes a decision. We have a bigger calling then the bottom line to share with our shareholders. That doesn't mean we neglect the finances and take care of the company financially, but there is 'the bigger calling’, to help others."

ORANGE COUNTY, CALIFORNIA: Newly married Daniel and his beautiful bride Christina moved from Kansas City to Laguna Niguel in September 2012 to start their Forerunner Recycling venture. They are in the “courting” stages with an organization providing day programs for adults with disabilities. Daniel and Christina visited a prospective location in December and saw a very loving, very family-like atmosphere.

“Everyone was just so happy and excited to be there. We were stunned to see the employees come up and greet the VP of Sales, like he was their best friend. To see the honor and joy that they have at their place of work was so heart-warming, that I even wished I could work there every day.” More from Daniel in 2013!

AND MORE TO COME in 2013…… New frontiers for Forerunner Recycling are forth coming, including Dallas, Texas and Tampa, Florida. Shannon and Martha Garvey are gearing up for Dallas in the next 6-9 months. Stay tuned!

SO THERE YOU HAVE IT! AMAZING 2012! All because of you and your computer equipment! THANK YOU, to all of our partners in St Louis and Denver. You are changing lives one computer at a time. Your computer scrap becomes the workshops sustainable revenue stream.

We are looking for more corporate clients to partner with the “Connecting Hearts Workshop Program”. If you know of other businesses who may like to be part of this program, please do NOT hesitate to let us know.

A BIG HEARTFELT THANK YOU to ALL!